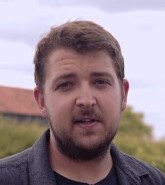 Paul is a freelance cinematographer and lighting cameraman based in Suffolk. He works in TV, film, commercial, corporate and digital content production.

Magpie tells the story of three lives forever altered by the physical, social and cultural changes to the UK East Anglia region during World War II.

With such a tight filming schedule, Paul needed to work fast. He also needed to work efficiently to get the results he wanted. The FSB 10 T’s ability to handle both heavy and lighter camera rigs with a single tripod system really came into its own.

“I used the FSB 10 T for the first 12 days of shooting – 10 of which were consecutive – so I became very accustomed to and subsequently dependent on its qualities and ideal uses,” said Paul.

“During production, it balanced and moved our heavy FS7 cinema setup with smooth, controlled motion, making it a great balance of simplicity and functionality. It’s an incredibly quick, reliable and sturdy support system, so it’s a great match for any fast-moving environment, whether that’s corporate jobs, documentary work, or a low-budget independent film like ours.”

Working as fast as you do

When you only have a limited number of days and a stretched budget to shoot an entire film, making adjustments to a shot is a risky, time-consuming exercise. Sachtler FSB 10 T solves this problem by making set-up as simple as releasing a catch, and its lightweight design makes it easy to move with a camera attached. On a set like Magpie, these time-savers proved to be significant.

It was a relief to have a tripod system that never hindered the camera team or limited the movement of the camera."

“When you work with tight budgets, you often have to sacrifice certain shots or methods of shooting if your equipment won’t allow for them, but Sachtler’s FSB 10 T made it very easy to attempt any shot, no matter the weight and size of the camera package.”

With all the unexpected problems that can occur on a film set, knowing that you can always rely on your tripod can really make things easier.

Watch the trailer for “Magpie” here...