Not only has Clinton Harn worked as an AC and camera operator for Rodney Charters, ASC who’s known for shows like 24, Dallas, and Shameless, but another career highlight includes shooting for two-time Academy Award winner and director Malcolm Clark.

Acting as cinematographer and producer, he’s currently wrapping up the Australian drama comedy Pop-Up. Since the film interweaves three different storylines together, Harn had to deal with an intricate and fast-paced production schedule. “Since this was my first full-length film, working on it was a challenge. We were all over the place, so anything that could make the production process even a little bit easier was going to make a big difference,” said Harn.

To help maintain his workflow, Harn chose to pair his RED Epic with the Sachtler FSB 8 fluid head and the Sachtler SpeedLock CF tripod. His camera rig was slightly bigger than expected, so the FSB 8 was great to have on hand.

Whether we were in the studio or dealing with salt water or wind, Sachtler held up the entire time. And that’s what it comes down to."

“With my rig, it was great that the head was able to carry a heavier payload than I thought. And its counterbalance and drag controls were the most elaborate that I’ve seen compared to any other fluid head in its class,” mentioned Harn. “But by far, the SpeedLock legs were the most convenient because I could adjust the height on the fly with only one latch.”

Using the SpeedLock feature, Harn was able to work with the tripod quickly since he only needed one release to modify all three legs at once. So even with his strict, erratic schedule, Harn didn’t have to worry about his gear while he was moving around on different terrain.

“Whether we were in the studio or dealing with salt water or wind, Sachtler held up the entire time. And that’s what it comes down to. I get to do what I love the most without distractions or delay.” 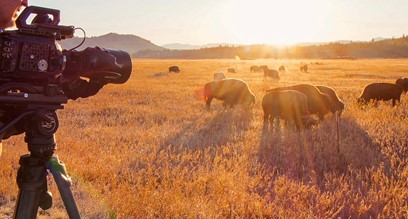