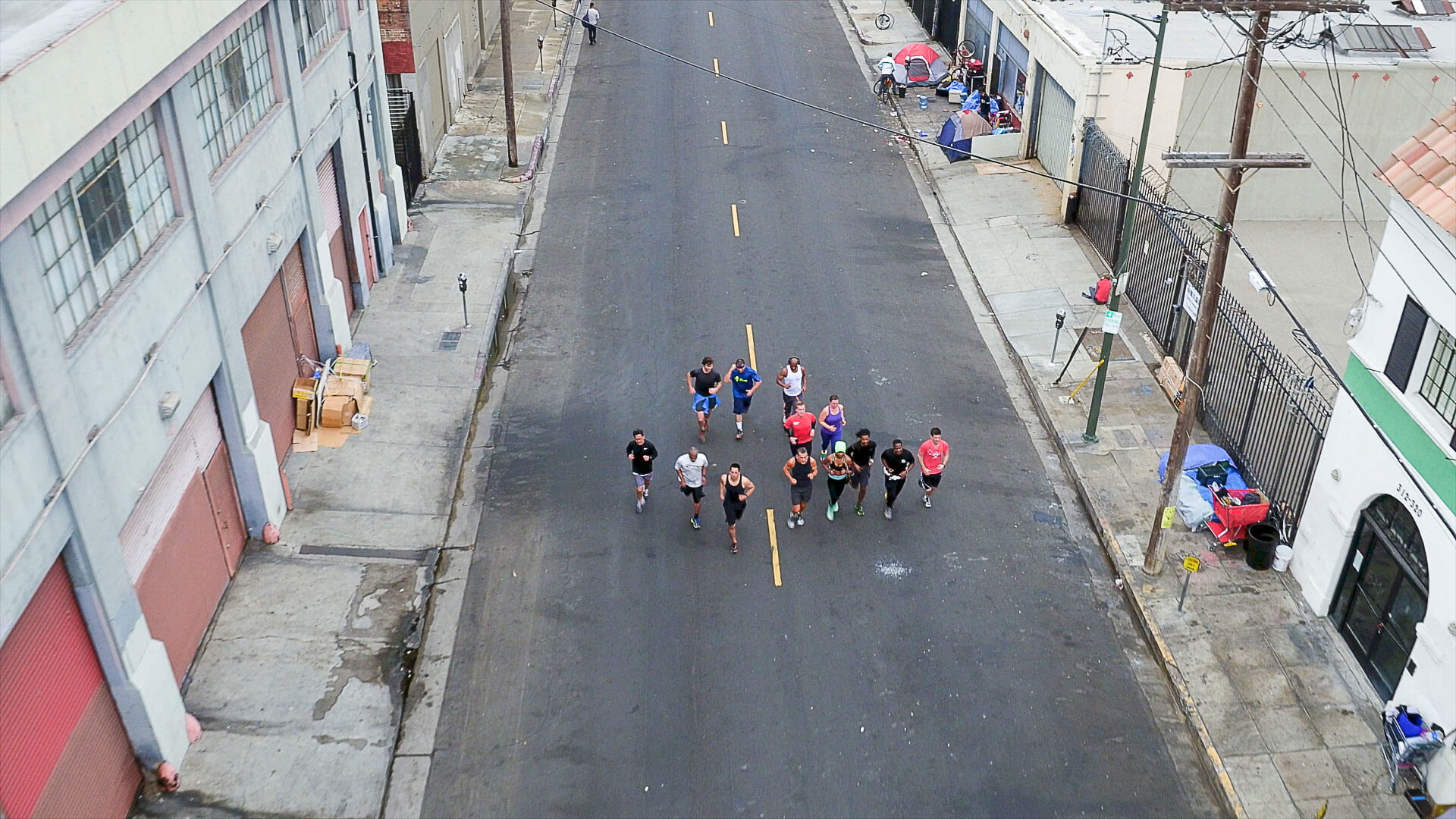 Gabi and Mark relied on a Sachtler flowtech100 tripod to overcome some unique challenges on the shoot and help them capture compelling footage of the runners on their early-morning training runs in some of LA’s meanest streets.

A staggering 60,000 people live on the streets and in the shelters of Los Angeles County – many of them stuck in a downward spiral of addiction and despair. As the founder of the Skid Row Running Club, Superior Court Judge Craig J. Mitchell has raised funds to help save hundreds of rough-sleepers through the empowering sport of long-distance running.

If you think this sounds like the makings of an award-winning documentary, you’re right. It’s called ‘Skid Row Marathon.’

The latest project of filmmakers Gabi Hayes and Mark Hayes, “Skid Row Marathon” tells the inspiring story of Judge Mitchell and the people who have turned their lives around through the Skid Row Running Club. The judge, a former prosecutor and marathoner, started the club in 2012 after a visit to the Midnight Mission homeless shelter. In the film, he states, “My involvement with the running club impacts lives in ways that I cannot as a judge.”

Since they first laced up their running shoes in 2012, Judge Mitchell and the members of the Skid Row Running Club have travelled to Ghana, Rome, Vietnam, Berlin, Jerusalem, and – most recently – Ecuador to compete in international, elite-level marathons.

When Gabi and Mark learned about the all-new flowtech tripod, they were already deep into production on the film. Runners themselves, they would accompany the Skid Row Running Club on its early morning training runs to capture footage in some of Los Angeles’ meanest streets. They also travelled to Ghana and Rome to record club members’ participation in two international marathons.

“When we first started the project, we were using a conventional and much heavier tripod. The problem with that was that we were literally running and gunning with our gear. We’d pan a group of runners as they ran past, and then we’d have to break down and literally sprint, with all of our gear, to a new site maybe a quarter mile ahead and get set up quickly to catch the runners again,” Mark says. “It was really hard with the old tripod, but when we saw flowtech at a recent Cine Gear Expo, we knew it would give us a much better option.”

A lighter, faster, and easier tripod for shooting on the go

About the time Gabi and Mark started using the flowtech100 FSB 10 tripod system, they upgraded their camera of choice to a Canon C300 Mark II with either a 200 mm or 400 mm lens. At times, they also used an ARRI Alexa Mini and a SmallHD 502 monitor powered by an Anton/Bauer Digital 150 battery, which boosted the total payload to almost 20 kilograms.

With flowtech, Gabi and Mark established a workflow by which Mark would detach the camera and Gabi, herself a seasoned marathoner, would shoulder the tripod and take off for the next shooting location. Seconds after she set up the flowtech at the new location, Mark would arrive and attach the camera.

“Even with the heavier payload, flowtech100 was so much lighter and easier to manage,” Gabi says. “We’d stop-shoot-run, then stop-shoot-run. I might have 15 seconds to take off and run as fast as I could to the next location, set up the tripod, adjust the height, and lock each leg in place. But flowtech was really light and comfortable to carry on my shoulder, and the quick-release brakes made setup almost instant, even on uneven ground.”

“The conventional tripod we were using before wasn’t just heavier, the brakes were harder to lock – and Gabi would often pinch her fingers,” Mark said. Added Gabi, “I had black and blue fingers most of the time! But I don’t have to worry about that now with flowtech.”

A broader safety concern was the notorious Skid Row neighborhood of Los Angeles, an area that’s dicey in the daytime and can be downright dangerous at night. “Judge Mitchell has come close to being assaulted. People throw things. Someone punched one of the runners once, and Gabi and I have had several incidents,” Mark says. “It’s really important that we’re able to move at a second’s notice to get out of harm’s way, and flowtech helps give us that assurance.”

Smooth and stable shooting from a car

In addition to shooting on foot, Mark and Gabi mounted the flowtech100 in the back of an SUV to improvise a chase vehicle. “With the zoom lenses we were using, it was important to keep the setup as stable as possible. Before, we tried all kinds of stabilisation methods, but nothing was as stable as the flowtech,” Mark says. “And flowtech’s ability to go really low without a spreader, as low as a high hat, made the setup even more versatile. We’d just spread the tripod as far as it could fit in the cargo compartment, and off we went.”

Building hope, one step at a time

Since its release in early 2019, “Skid Row Marathon” has picked up close to 30 awards from national and international film festivals, and it’s now available on DVD and for streaming over Apple TV, Amazon Prime Video, and other digital platforms (skidrowmarathon.com).

“The homelessness crisis in the U.S. is overwhelming, but people like Judge Mitchell make us believe it might be solvable through grassroots efforts. The judge could see that many people with substance abuse issues, people who are homeless and addicted, are really struggling with low self-esteem. Take it from us - there’s nothing like a six-mile run at 5:45 in the morning to boost your self-esteem!” said Mark. “The discipline of running helps people feel better about themselves and gain self-confidence, a critical factor in recovery. And when you add on a trip overseas to a marathon in a city like Rome, someplace they might not ever be able to visit otherwise, the rewards are immense.”

The flowtech100 played an important role in helping us tell the Skid Row Marathon story. A tripod that's this light and yet sturdy and stable, plus so easy to set up, raise, and lower, really is a game-changer. It’s an example of how the right tools can help you realise your creative vision and get the results you’re looking for – results that will get you noticed in the highly competitive and crowded world of documentary filmmaking.”