Nick Midwig is an award-winning cinematographer with over a decade of experience setting the visual tone for critically acclaimed feature films, television series, and commercial campaigns. Find out how flowtech75 and flowtech100 systems mean that Nick never misses a moment.

As an award-winning cinematographer based in New York City, Nick Midwig thrives on the gritty hustle and bustle of urban life. In his decade-long career, Nick has set the visual tone for a broad range of critically acclaimed films, television series, and commercials. His most recent feature film, “Moonlight Sonata,” premiered at the 2019 Sundance Festival and is now airing on HBO.

Nick was also cinematographer on the Emmy-nominated documentary feature “Beware the Slenderman,” which also aired on HBO, and served as DP for two seasons of the visually gorgeous National Geographic series “MARS,” executive-produced by Ron Howard and Brian Grazer.

Nick is an indie filmmaker at heart. And his flowtech tripods are among his most reliable tools.

I got my start making skateboarding films with my friends, with just a camera and a backpack, and I’ve had a self-sufficient approach ever since. I prefer a low profile that lets me work as nimbly as possible, which requires gear that lets me move and set up quickly and easily. That’s one of the reasons I love flowtech.”

Nick was an early adopter of the flowtech carbon-fibre technology, jumping on the 75 model when it was first launched more than two years ago. Today, his flowtech100 is a mainstay of his work, carrying a Sachtler Video 18 S2 fluid head and either an ARRI AMIRA, Sony Venice, or ARRI Mini LF camera. A SmallHD Cine 7 monitor with built-in Teradek Sidekick Bolt wireless receiver is also onboard for most projects.

“I had been waiting years for a product like flowtech. Before, a few other tripod manufacturers offered carbon-fibre models, but they were either too heavy or had other limitations. I was constantly taking parts from one tripod and putting them on another to give me something as lightweight, efficient, and easy to use as flowtech,” Nick says. “That’s why I was so psyched when flowtech hit the market. I could tell right away that it had everything I was looking for.”

A tripod that goes the distance.

Nick acquired the flowtech75 just in time to take it along on his trek to one of the most remote and physically challenging places on Earth: the Arctic. Shooting for the National Geographic “MARS” program, Nick journeyed to Greenland, northern Russia, and the Svalbard region of Norway.

“Even carrying a full payload, flowtech is extremely easy to carry over your shoulder or using the carry handle,” he says. “And it’s really fast and easy to set up and adjust to uneven, rocky, and even icy ground using the quick-release brakes that automatically set the height of each leg.”

He adds, “In a documentary environment, things often unfold in front of me in real time. Seconds matter when you’re trying to get a particular, fleeting shot, and flowtech helps me make sure I don’t miss the moment.”

With flowtech’s rugged carbon-fibre construction, Nick has one less piece of gear to worry about when traveling to shoots. “flowtech definitely has a non-traditional appearance, so your initial concern might be – will this tripod last? Will it be durable? But I’ve been using both the 75 and the 100 for two years now, and they’ve held up beautifully,” he says. “For me, gear is meant to be used, and it’s great to know I can rely on my flowtech tripods to withstand a lot of punishing travel.”

Nick appreciates flowtech’s flexibility to go super-low for ground shots. “I just pop out the tripod’s spreader to get as low as I need to. And then, just as instantly, I can bring it back up to eye level,” he comments. “It means I don’t have to carry a separate set of baby legs or a high hat – and that makes a huge difference when you’re traveling to remote places and you need to keep your gear to an absolute minimum.”

Hitting the streets with flowtech.

In one of his latest projects, Nick took his flowtech100 on an urban adventure through the streets and subways of New York City. “It was my favourite kind of shoot – just me with a backpack, a camera, and a set of sticks,” he says. “I was shooting on the go: getting in and out of cabs and subways, getting on and off ferries, and walking a lot. New York is a perfect playground for showing off how easy flowtech is to carry and how flexible it is for any kind of shooting situation.”

I’m very story-driven. I love the push-and-pull world of documentary work – getting beautiful shots is only half the equation; the piece also has to tell a great story. That’s why I rely on gear like flowtech – the less I’m fussing over my equipment, the more attention I can give to the story.” 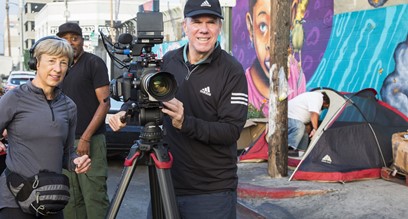