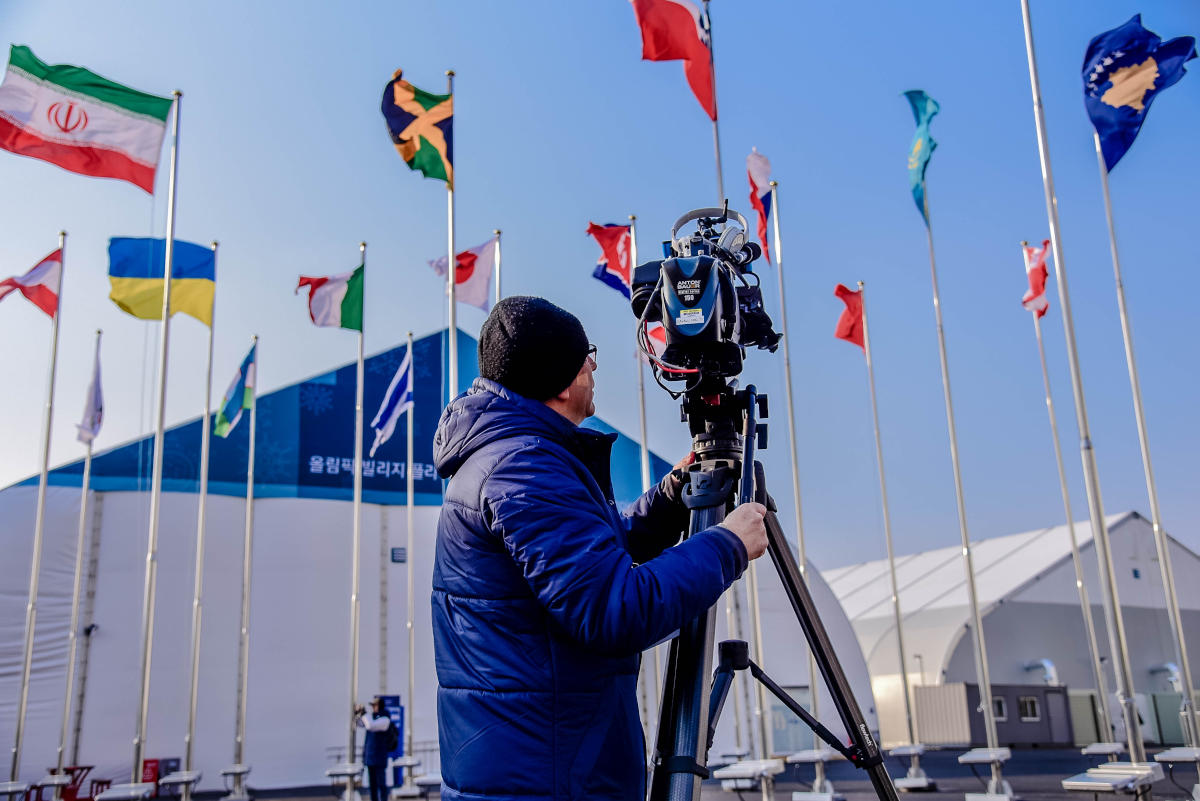 Renowned news cameramen Darren Bramley and Ken Cavalli have endorsed the new flowtech®100 after field-testing the tripod in demanding electronic newsgathering (ENG) and live news environments. The world’s fastest deploying tripod, flowtech100 is compatible with all 100mm fluid heads and can support a payload of up to 30 kilograms (66 pounds), making it ideal for heavy-duty ENG production.

Available now from authorised resellers, flowtech100 is the latest collaboration from trusted brands Sachtler and Vinten. The new tripod is based on an exclusive carbon-fibre technology that makes flowtech100 extremely strong and lightweight and yet offers outstanding torsional stiffness. Quick-release brakes conveniently located at the top of the tripod enable the legs to be deployed simultaneously; each leg adjusts automatically to the ground’s surface, saving operators from having to bend over and manually adjust multiple brakes on each leg. These features — together with flowtech100’s exceptional stability and capacity for heavier camera payloads — optimise the tripod for ENG workflows in which camera operators are moving quickly to cover fast-breaking news stories.

Based in the U.K., Bramley serves as head of cameras at ITV Daytime, where he supervises the channel’s award-winning daytime programmes including “Good Morning Britain,” “Lorraine,” and “This Morning.”  Bramley tested flowtech100 with a Vinten Vision 100 head carrying either a Sony 2500 or Sony 1750 camera with wide-angle or standard EFP lenses in both a studio environment and for stand-up interviews outside the ITV Daytime facility.

“I have used other carbon-fibre tripods, but none compare to flowtech100’s rugged build quality and attention to detail. It brings the benefits of light weight, high stability, and ease of use to the professional 100mm bowl size that’s so prevalent in ENG today. It’s a practical solution that can meet the everyday needs of even the most demanding of camera operators,” Bramley said.

“Our staff operators and freelancers alike were very keen to use flowtech100 in the field, and it more than lived up to their expectations. We often have to quickly reposition cameras during advertisement breaks, sometimes in under a minute. But with flowtech100, operators can just pick their position, open the tripod, and undo just three clamps at the top of the legs — and they’re ready to shoot in no time.”

He added, “Other innovative features really set flowtech100 apart, like the magnets for keeping the legs together for transport instead of bungy cords or old-fashioned clips. We also love the threading on the top of the legs for mounting accessories. Leave it to Sachtler and Vinten to come up with such simple yet clever ideas that really make a big difference for demanding field work.”

Cavalli is director of photography at satellite transmission service PACSAT and its subsidiary, Capitol Television News Service, a video wire service providing broad coverage of news from the Sacramento, California, region. He also does freelance camera work for NBC, which gave him the opportunity to field-test flowtech100 at this year’s Winter Games in Seoul, South Korea, and for NBC’s coverage of the recent Northern California wildfires.

“Right away, I knew flowtech100 was special. It’s unlike any other tripod I’ve ever used in my 30-plus-year career,” Cavalli said. “The ergonomics are fantastic — with the quick-release brakes at the top, you can set it up and adjust it in an instant and without having to bend over, and the shape of the legs makes it really comfortable to carry on your shoulder. Even the handle is in the right place for easy carrying. These features, in addition to its extremely light weight, made flowtech100 a dream to work with as we moved around to different venues at the games, some of them icy with uneven ground and other rugged conditions.”

Cavalli tested flowtech100 with a heavy payload of 20 kilograms (45 pounds) consisting of a Sony PMWX500 ENG camera, a Sachtler Video 18 S2 fluid head, and a teleprompter.

“The flowtech100 was especially useful in the extreme fire conditions, where easy setups and quick breakdowns were crucial. And even with all that weight, the tripod was incredibly stable,” he said. “Another really valuable feature is the ability to adjust flowtech100 to near ground level by removing the quick-release spreader. It means you don’t have to carry a high hat for super-low-angle shots, which saves a tremendous amount of time.”